557
I finished watching an anime called drifters. it was super dope. I like how every character was based off of real people. Oh.. and I like the blood and gore and kick-ass bad-ass fighting. I don't watch anime much but that was phenomenal. I'll take any recommendations similar to that anime.

8,261
Not technically anime. But I saw the new episodes of Steven universe. Aquamarine is the kind of character you'd see in bizarremonkeys games and comics.

8,261
Danmachi Gaiden finished up. It didn't reach any meaningful conclusion. It's a lot like the first season, they introduce these bad guys, you don't know what their motives are, and the final episode just shows them in their lair being all pensive, vaguely mentioning their "plans" and things to come. But I'm going to have to chalk this up as another unfinished series.

KNIGHT'S & MAGIC episode 1. It's a weird premise. It's always hard to judge a show by their first episode because they're just setting everything up. This episode had a lot of timeskips and progressed rapidly.

This computer programmer with an obsession for Mecha Robots gets hit by a car and dies. He's then reincarnated as a boy in this fantasy world where magic-powered mecha armor knights fight giant bugs or something. It's hard to say how self-aware the main character is. He's obviously retained some knowledge of his past life. He'll use the term "robot" and everyone else is like "what's a robot?"
So anyways, his obsession with Mechas is still there and 3 years after this awakening(of sorts) he is advancing through magic school quickly because he's got these sophisticated insights from computer programming that nobody else has. So while everyone else has magic staffs and simple spells- he rebuilt his into a rifle thing, along with this jet packs.
But he's still a boy and won't be a pilot (Knight Runner) anytime soon. So he thinks to build one himself. That should be a plot point for future episodes. These knights were built thousands of years ago and haven't been improved upon since; the engine is a government secret. But I'm sure everyone suspects it involves the giant bug monsters, 'cause that's always the case.


I began to watch YuGiOh GX too, but I cannot stand it, it treads very similar paths to the original series, with the whole 'Protaganist almost loses... but gets heart of the cards and crushes his opponent in the last couple turns. But I guess I was hoping for too much to expect any deviation from that happening in almost each episode.

8,261
So it seems shows that are based on online games end up being pretty goofy and full of anachronisms. I guess that's to be expected when you've got technologically advanced Gunners along side Mages, Knights, and Martial Artists.

You'll have something like a Dojo and noodle carts next to a European Castle.
Sail boats in one episode, motoboats in the next.
Modern policemen and interrogation rooms - because the episode went there.
Quick! We'll escape by sliding down this air vent into the sewers. Don't think about it.
We'll settle things with a game of soccer - but using a volleyball because we're on a budget and have to recycle assets from other episodes.

25,610
You should try Overlord, it doesn't seem to fall into the same issues the other MMO animes do.

8,261
I've seen Overlord, it's good. Season 2 should be coming out soon I think.
That and Log Horizon's story are set in a MMO, but the whole thing was originally a Light novels.

I'm talking about shows that were actual games to begin with; so their story is non-existent and the lore and stuff was only light flavor text to begin with.
Dungeon Fighter Online. Ixion Saga.
I know there are other shows based on Apps games like Puzzle & Dragon and GRANBLUE. Puzzle & Dragon is definitely more toony, I'd expect something on the level of Pokemon.
Granblue looks more serious, I've never played the app, but it's also only 13 episodes, so it's possible it might have a good story.

I was really surprised at how accurate the first season was, the second season seems to be on par. If you want to know how a small game studio operates, then I recommend watching. It is a cute-girls anime though, so there's some tropes that obviously don't fit reality, but those are easy to spot.

8,261
I want to enjoy mecha anime because it looks cool. But I've still got 4 episodes left of ARGEVOLLEN from 2 years ago I haven't watched yet. Like, I'm saving them for a rainy day in case the power or internet goes out. I mean, the final episodes should be the most compelling, but I don't want to watch them unless I have absolutely nothing else to do. That's bad.
It might be because most Mecha anime have military and political themes. I remember watching Gundam Seed and thinking how boring the episodes actually were, it was all character drama and then a 3 minute fight sequence at the end.

I liked Zoids. That was more of a competition genre thing, You know like Beyblades or Yugioh. Well, I'm not sure if I'd still like it now.

I'm currently enjoying Knights & Magic, so far every episode they've just been building one new machine after another. And every episode has a fun surprise. But I half expect the politics or some shadow government/illuminati to kick in and things get serious. Like, you can't keep building war machines without consequences. But I also half expect, the Otaku's obsession would have anticipated that and have a contingency plan for everything.

589
I know exactly what you mean - I'm in the exact same boat. I'd love to be passionate about mechs and Gundam, because building them looks like so much fun. The shows look badass as well. I loved Zoids when I was younger but now I just... I don't know.

... I've been corrupted by moeblobs.

8,261
Knights & Magic ended at 13 episodes. It was a good show. I mean, the kind that you look forward to watching every week, but wouldn't bend watch in one sitting. There's hardly any character development, which is fine since it's so short.
I really enjoyed the villain in the later half. He's a good match for the main character. They're both enthusiastic inventors, but they're into different things. They see each other's advancements as a threat that could render their passion obsolete. Airships vs Mechas.
There's room for a continuation, but this is as far as the light novel got. And I think this is one of those stories that ended on such a good note that continuing it could spoil it.

The only other anime I'm watching is Dragon Ball Super. It's still doing this multi-verse battle royal arc. I'm not loving it. The opponents are dumb. It's going to continue into October.

557
There's no good anime that suits my fancy right now.

8,261
Just watched Made in Abyss.
Oh god. It's surprisingly good. But I have to warn you, it looks like a sweet and innocent anime. But it gets dark. Really dark.
Like body horror, Full Metal Alchemist Elric brothers resurrecting their mother, shoot Old Yeller because has rabies - kind of grim tale. It's definitely for mature audiences. Creepy sexual undertones, nothing as extreme as Neon Genesis Evangelion's "I'm so fucked up" scene. But the characters are suppose to be preteens, only they look like kindergarteners, and you just know the show is playing at all types of fetish fuel.

So to give you a quick premise without spoiling anything, there's this society built around a pit called "the Abyss". It's basically like those Tower/dungeon rpg based animes, like Tower of Druaga, and Danmatchi. The pit is full of monsters and relics, and these people excavated it. But it doesn't have the RPG party cast. It's an orphan miner girl and a boy robot. It's got similarities to Cave Story I guess (I've never played it). Some people compare it to Dante's Inferno and it's levels of hell, but I wasn't picking up on any deep spiritual symbolisms or parallelisms.
Besides being dangerous the deeper you go, coming up is also an issue because of a "curse". Almost like divers decompressing. At some levels it's just dizziness and nausea, deeper it causes hallucinations, bleeding orifices, mutating, and death. These hit once you begin going up a slope or any kind of ascent.

Anyways, girl finds mysterious robot boy with no memory. Girl's mother was a prestigious explore who reached the deepest depths. Mother is presumed dead but a message suggests she waiting at the bottom of the abyss, with a possible connection to the the robot boy. The girl and the robot boy go down to look for her and some answers.

A lot happens in 45min episodes. 13 total. Worth a watch.

8,261
Speaking of Full metal Alchemist, I never noticed this before. 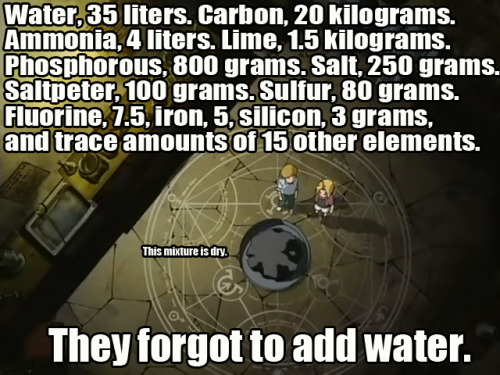 And Sloth is basically a water elemental, that's interesting.

8,261
Normally I'd have a movie marathon for Halloween. But I don't have anything picked out. So tonight and tomorrow I'm wrapping up the final episodes to a bunch of series. I've been putting off.

I recently finish the last half of Vividred Operation after putting it off for a year.
And I've got 4 episodes left of Night Wizard.

There was a new season of Blue Exorcist this year. But I only watched the first 2 episodes and have been saving the rest for a rainy day. I guess that's Halloween appropriate. Possibly. Demons and shit.

That reminds me, there's this japanese short called Kakurenbo: Hide and Seek. It aired on Adult Swim back in 2005. It's only a 25 minute film. 3d celshaded. Kids wearing Japanese masks running from demons in this town.
I think I'll look it up and try watching it again. See if it's as good as I remember it being.

with that being said I started a few new ones.

8,261
I never got into Deadman Wonderland. I watched the first few episodes - but for some reason I wasn't interest in it. I don't remember what it was, it was some time ago.

Fayte":1ssfxfj3 said:
all anime is bad.

with that being said I started a few new ones.

Darker Than Black, Deadman Wonderland and Brave 10.
Click to expand...

Oh Darker Than Black is good!
Though I was sternly warned to stop at the end of the first season. This was from my anime guru friend whose seen 350+ anime shows, and doesn't drop a show she's began... so I kind of trust her judgement. XD

8,261
Overlord is suppose to be returning in 2018. There was a trailer.
Apparently there were 2 "films" but they were literally just a recap of the 13 episode condensed to an hour or two.
The first season only goes up to vol 3 of the light novels. But there are 11 vols total so far.

What's been killing me, the last anime arc ended with a character getting mind controlled, but we never find out who was doing the controlling. I was tempted to look up spoilers or translations. It probably won't be a satisfying answer, but my brain craves closure.

557
I started watching gurren laggen. It’s a little too goofy for my tastes but it’s cool. Still watchable.
You must log in or register to reply here.