These eight are the latest issues and they are the ones I am most proud of. Chunky in length and a definite rise in quality. Take any issue with the pink HB badge as a quality sign.

We had a good run, and the first four issues of aRPGMaker were high quality, but ultimately the magazine was too much work to complete, especially as we were still making HB the Zine at the same time. It was difficult to get the outside community engaged, which was the purpose. Nonetheless, if you exclude the last issue which is a bit of a dud, aRPGM is a solid work.

These mark the Dark Days of .org - especially since there is a three year gap in there too. The issues are smaller, contrived so as to use as little content as possible to make them easier to churn out. I am not proud of these, although there are some great games and a few decent articles mixed in.

These mark a huge uplift in quality from the Despain era, and they were my first attempt at actually replicating the original eZine format. They are more graphical than Lene's issues and a lot of them are highly experimental in terms of look and layout. And, I think, there are some decent articles in the mix!

These were originally released in a different format, and they are short and not very sweet. Issue 8 for one is just a test issue and highly questionable. There are some good reviews in here though, such as Mawk's review of vvvvvv (which was never actually one of our games...)

These are the first issues where I am involved in the creation of the eZine. I had some help from some regular members at the time (you'll see their articles).

This was wedged in later on to fix the fact there are too few magazines, as one issue was labelled "Issue 3 & 4 Bumper Issue!" (it's short).

We feature three reviews of our Games of the Year for those years, and catch up on some of the big contests that went on at the time.

This era was largely where we shifted to the This Week on .ORG thread format for news and content, and so the eZines were unnecessary.

These are the original eZines, edited by Lene and her eZine team. The first three are from the dark days of the collapse of RMXP.net; the next three are from the embers of Ccoa and Erk's RMXP.org. They're gritty and difficult to read sometimes but they started something big.

268,122
Now taking submissions for issue 29. Can be as short or poorly thought out as you like, even if it's a one liner that gets me rolling I'll turn it into an article. Even if it's just a whiff of an idea that's been left next to a bottle of flavoured water for a month on a broken shelf in a broken toilet in the basement of the local registry office with a sign marked "beware the leopard". Even if it's just a "you should feature X".

25,610
"My favourite cursed content"
"Mistakes beginners make when making RPGs"
"The successes and failings of Afar in retrospect"
"How the eZine is made"
"Concepts never/rarely seen in an RPG Maker game"
"Ranking all versions of RPG Maker"

I don't know if any of these have been covered before, I've only made it through the later issues.

268,122
Not bad. Although ranking the RPG Makers would be hugely subjective. I know on mine VX and Ace would sit at the bottom for example, while many made good use of them after XP.

But actually I can go quite in-depth on which are my choices.

17,731
lolyeah, trying to rank the makers objectively is a good way to start a fight. Ranking them subjectively however can be neat with some tact though.

As for more ideas for articles...
"Weird/complex eventing wizardry"
"When to put in a fishing minigame and the pros/cons of different styles of fishing minigame"
"Designing a location - concepts, biomes, and backstory"
"Mood setting methods"

268,122
Maybe we need a thread about it. I know we used to have one that always turned into a shitshow, but that was back in those days when we were all opinionated kids.

In this issue we look at games old and new, as we attempt to migrate our past games from the old forum system to the HBGames Xen games manager. We dig up a relic from the past, the enormous Aedemphia, and look at some of the games posted to...

To comment, review, rate and do other stuff to the eZine visit the eZine manager: https://www.arpgmaker.com/index.php?resources/categories/hbgames-org-the-ezine.17/

I've edited the first post so that the links are now tracked for downloads in the eZine manager.

I've also split them into volumes, so that I can describe where we were at for each set, as I feel like they are all different in their own ways. I don't want someone to leap into one of the dark era issues thinking that's what the rest are like.

72
They makes more sense like that than just as a big page of images. Easier to see what is what. I also like how each section is in reverse order.

136
There is a plug-in that lets you use RPG maker MV plug-ins inside RPG maker MZ which would be worth talking about in this.

eZine runs seem to come in five-month blursts, which are really centred around one or two really productive weeks. Difficult to maintain as a monthly thing without burnout.

Game of the Year and other events seem to kick me into gear and get me going again (but curious the Hallowe'en event didn't do that for me).

Taking any submissions or ideas for a next issue.

268,122
I sorted the eZines to see which was the least downloaded and it turned out to be the Issue 3-4 double feature. I felt bad for it. I realised it was the only one without a proper cover page, so I spent some time refronting it to show off the art for Akasha Seal, featured. 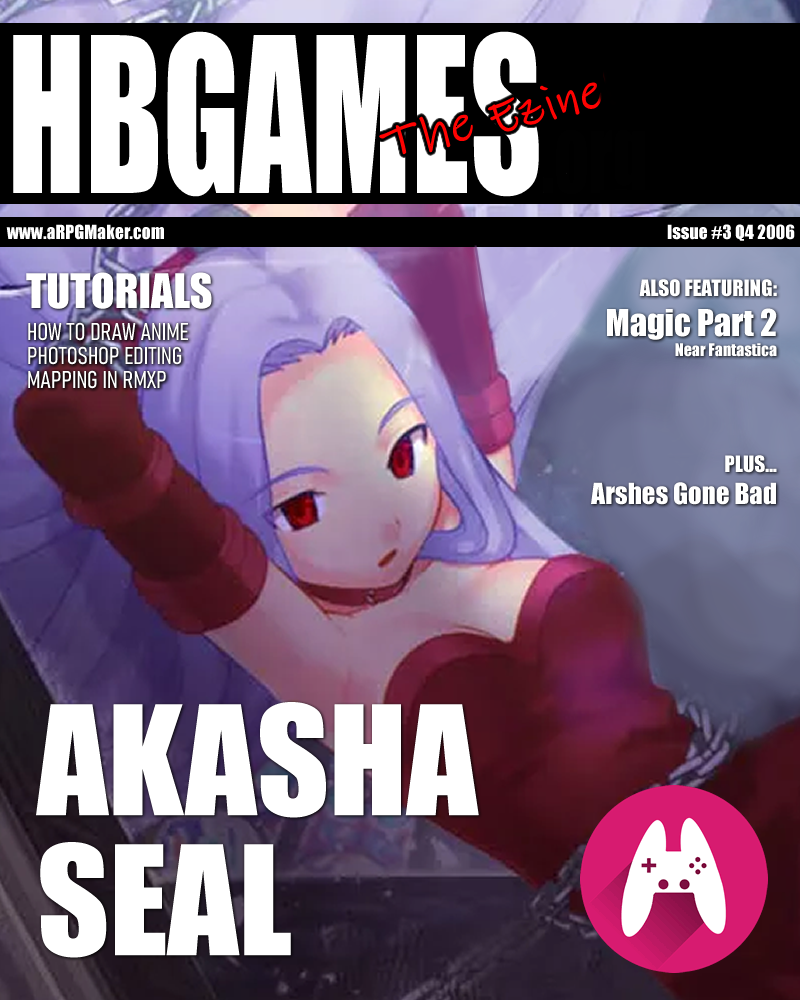 Anyway as it happens it was only the least downloaded because I made a typo in the link on the directory.


https://www.arpgmaker.com/resources/hbgames-org-the-ezine-issue-3.145/download
You must log in or register to reply here.