The Last Days According to Ezra

The game is currently finished, and I finally ended translating it (it took me 2 days ahahahaha!). It's a short game, like half an hour, and it was supposed to be for a contest, where the thematic had to refer in some way to Apocalyptic stuff.

Hope for you to enjoy it as much as I did when making it.

SYNOPSIS
Ezra, worker on a factory whose name is Machine Inc. (never named inside the game), suffers some changes on his life. From being fired at unfair reasons, to being on not very plausible situations, he will be involved on a little but serious success that could put the entire world on risk if not stopped on the act.

MAIN FEATURES
-Intends to get to a more humanistic roleplay.
-No levelling, neither equipment. No more routines.

Ezra Bound, protagonist of the story.

Uriel, who joins you at a given moment.

The Red Avenger, some strange but deadly guy. 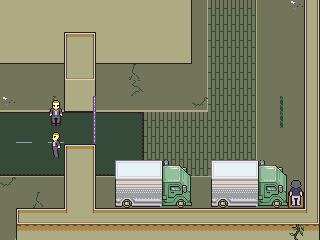 ·Graphics: Graphic content made with Graphics Gale (and Fony for the font).
All including font - Orochii Zouveleki
(Yeah, I put it on purpose =D).

RPG Maker 2000, used for the creation of this game, is property of Enterbrain Inc.